This past weekend I had the good fortune of being able to attend the Atlanta version of Rails Girls, a workshop for women and girls interested in learning about programming and Ruby on Rails. I'm very glad that I was invited.

I initially heard about Rails Girls from a talk (see below) that I stumbled across on twitter given by Joan Wolkerstorfer. Even though it's a little long I found it pretty inspirational.

Near the beginning of the talk, Joan mentions that she was a coach at Rails Girls Berlin. This sparked my interest and I looked for a local version of Rails Girls. At the time, the closest workshop was located in Washington DC. Eventually I learned that Highgroove Studios (now Big Nerd Ranch) would be hosting an event at the end of November. I knew that I had to apply.

There were a lot of applicants but luckily I was accepted. I think it's because they could tell I was excited to attend.

The applications are in! With 108 applicants and 35 spots, selection will be tough! We'll let you know of our decisions by 11/10.

Even though installing Ruby on Rails is notoriously difficult, I had a very smooth installation. I still had a few questions and Andy Lindeman, one of the coaches, was extremely helpful. He helped me understand why my $PATH variable was so long and what happens when the versions of Ruby and Rails are updated.

It seemed like most of the ladies were able to get everything installed and we spent most of the time meeting everyone and socializing. At the end we participated in the #FridayHug to share our newfound love for Rails. (You can spot me in the yellow shirt.) 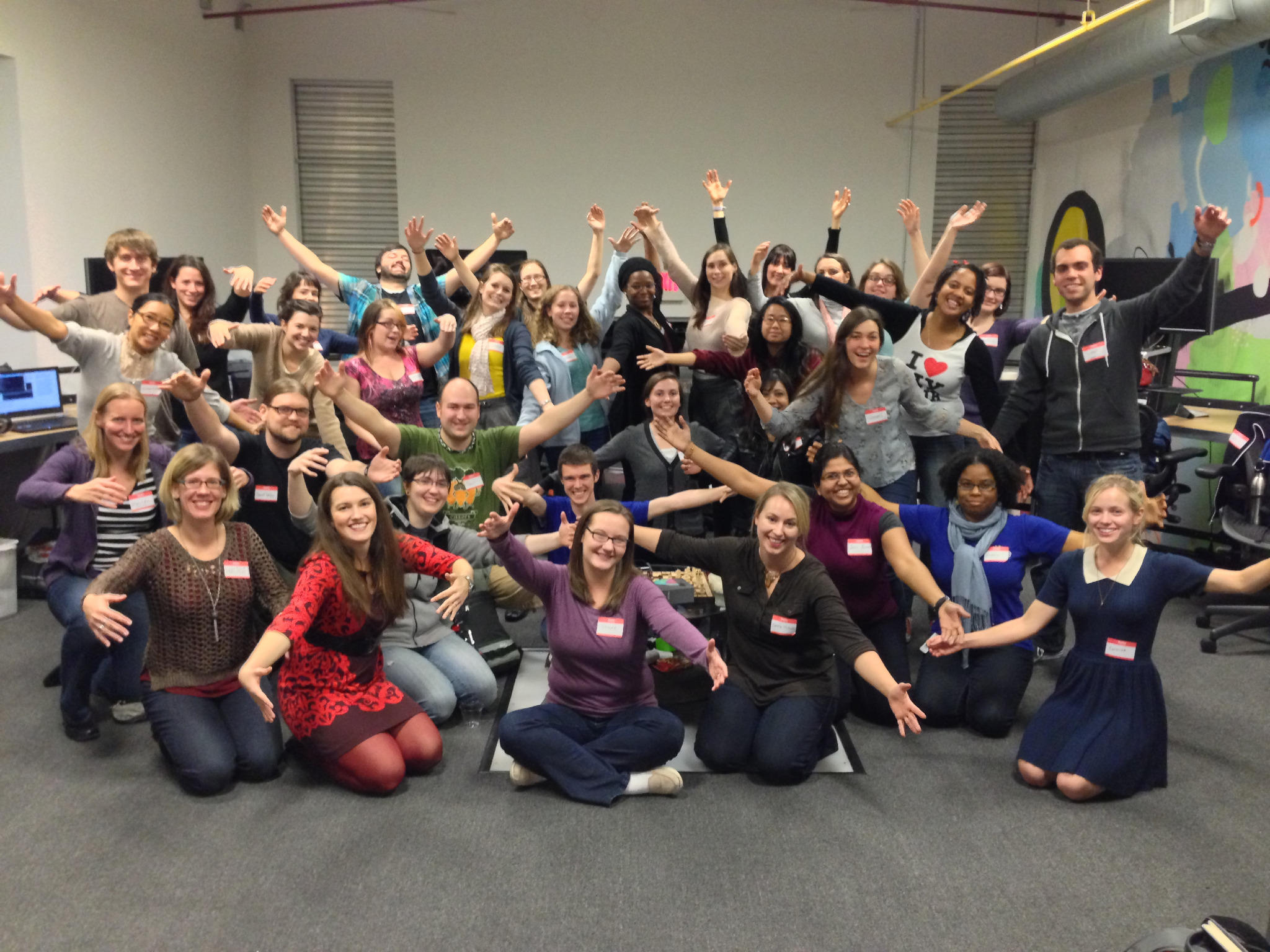 I should pause here to say just how awesome the sponsors for the workshop are. Huge thanks to HighGroove/ Big Nerd Ranch, Mailchimp, Heroku, The Phuse, Square, Octane Coffee, and Pardot. I'm mostly thankful for the time and support that these companies provided to make the workshop happen. In my opinion, it was totally worth it and let me just say that I am very loyal to my favorite brands. Plus the huge table of fun free things waiting for us as we arrived made us feel pretty special.

Saturday morning kicked off with a little breakfast and some espresso drinks from Octane. The coffee was so delicious that I overdid it a little. I'll just say that it was physically apparent that I was over-caffeinated. Part of my excitement was due to my favorite new mug. The morning started out with a few introductions but then we dug right into the code. Rails Girls has these awesome tutorials that help even the newest beginners to get their first web app up and running using Ruby on Rails. There is even a tutorial to help deploy to Heroku. The tutorials made it a breeze and I had my app up and running in no time. Also my coach Loren Norman was extremely helpful and super supportive. He even helped me bump up my hacker cred by showing me how to change the colors of my terminal. My app is still up on Heroku if you want to go check it out. It's basically a way to list a bunch of ideas. You can even upload a picture with the idea and the app changes it to a thumbnail. You can also leave comments. Another cool thing I worked on was a map of "attendees" of the event. We just put in fun places for our locations. If you visit the site, why don't you add yourself?

We stopped for lunch from the Good Food Truck and that's no lie. It was good! I had The Poodle dog with mustard and maple syrup. So delicious. After lunch we had some pretty amazing presentations. Andy Lindeman talked about the "Bento Box" exercise (slides) and automated testing (slides). He also showed a live demo of the tests running that was just soooo cool. I cannot begin to explain the coolness. There is supposedly video so maybe I'll update and you can see for yourself. Updated: The links for Andy's talks now take you to the live videos.

Charlie Tanksley also gave a (slide-less) talk about using Git for version control. I thought he did an excellent job of explaining a pretty difficult concept. Maybe I'll be able to speak so eloquently about these topics one day.

Laura Cassell also gave a great talk about having confidence. When it comes to coding, I'm often on an emotional roller coaster. Sometimes I think I'm awesome. Sometimes I think I am most definitely not awesome. Laura made us realize that that's ok and that everyone has hard times. She even offered to meet us any time and give us a hug if we needed one. Pretty awesome if you ask me.

Another fun thing about the day was Ernest the Dog. He was officially available for petting. It's really cool that HighGroove/ Big Nerd lets their employees bring their dogs to work. I hope I get to work in a place like that one day. At the end of the day everyone showed off all of the cool stuff they made. I was really impressed with the stuff the other women worked on and I'm inspired to build more things.

They also had a Nyan Cat in the office. What's not to love about that? After the workshop concluded, we all stopped at Sauced to have a few drinks and snacks. They had some seriously delicious cocktails. I'll definitely be going back.

I also really appreciated the extra time together with the coaches and other participants. It was great to meet such amazing people. The Ruby community has been so supportive. Even though every programmer has their favorite language, the community is what makes a beginner want to adopt a language and learn more. The help I've received from the local Atlanta Ruby community and the greater community on the internet has been so invaluable. I really can't wait to help other new programmers learn what I have. Maybe I'll even coach at the next Rails Girls.

Overall, my Rails Girls experience was fantastic. I'm excited about my future as a programmer and the things I'll be able to make. If you're thinking about hosting, sponsoring, or attending a Rails Girls event, I emphatically say "do it!"