Last year I participated in the International Space Apps Challenge which is a two-day hackathon sponsored by NASA. It's happening again this year in Atlanta at Big Nerd Ranch on April 12 and 13. I wanted to share a little bit about my experience and encourage others to participate.

When I learned about the Space Apps challenge last year, I was excited that there would be an event that would let me combine my knowledge of science and my new skills as a developer. I wasn't exactly sure how I would be able to contribute to a team but I knew I could help in some way.

When we showed up to the event we were greeted with lots of fun stickers and swag. I still use the keychain to find my keys.

NASA had already posted the list of challenges that they wanted the teams to work on with topics ranging from backyard chickens to the Mars rover. You can see this year's challenges here.

I settled on the ArduSat challenge because I've wanted to tinker with an Arduino for a while and I thought it would be a perfect blend of my hardware and software skills. Thanks to our generous sponsors the Atlanta team was able to purchase a full ArduSat kit with tons of sensors to use with the Arduino.

As much as I love backyard chickens, I couldn't resist the Ardusat kit. We broke into teams and I joined up with a few other people who were interested in building the ArduSat. This was my first hackathon and I definitely learned a few things.

My main goal for the weekend was to just get all of the sensors hooked up and running with the Arduino. Some of my other team members were focused on pitching our project to try to win the contest. I didn't really know how to program in the language that the Ardunio uses (C++) but two of the other team members did. I could help with assembling the hardware and making sure everything was wired correctly.

My team didn't work through the night. We got a few sensors hooked up the first evening of the event and came back the next morning for more. The break for sleep also allowed us to go home and gather some helpful supplies (like wire strippers, and a multimeter). By the evening of the second day we had all the sensors wired up and all the software needed to run the sensors written. Since the Space Apps Challenge was open source all of the code we wrote is still available on GitHub. 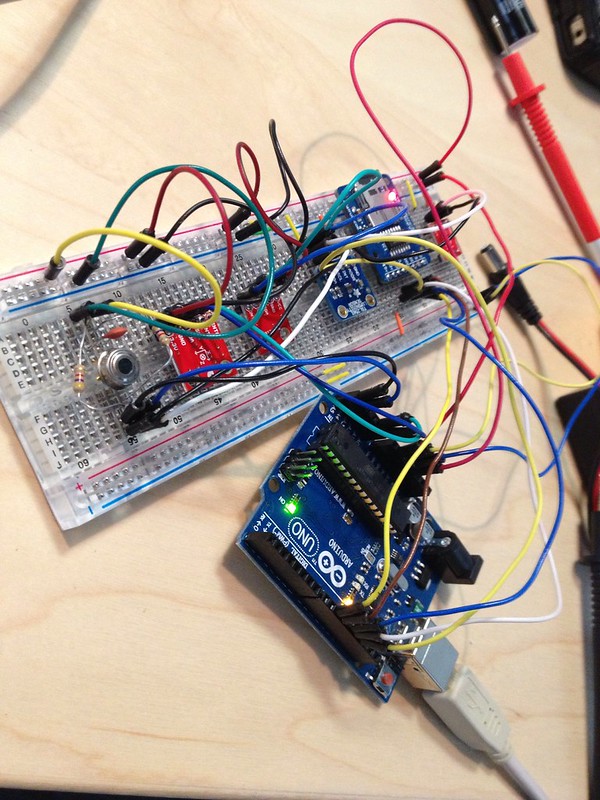 We didn't win the competition but we were able to get the sensors working. We gave a pretty cool demonstration of our ArduSat "flying" around the event and gathering data. I had a lot of fun and I would encourage anyone to participate in the Space Apps Challenge. Even if you're not a scientist or a developer you can contribute in some way. In fact, one of my favorite projects from the event was drawings of the Curiosity Rover in it's everyday life.